With default options on most levels, at the start of a match, each player has 1 bomb (allows for one bomb out at any point in time) and a flame size of 2 (explosions will cover the tile upon which the bomb was placed and 2 additional tiles in each cardinal direction).

With default settings, the power-ups players start with, and the frequency at which particular power-ups drop when destroying soft blocks, are specified by each level. Most levels use the defaults of starting with 1 bomb and 2 flame size, however some, such as Polo start you with additional power-ups like a kicker and a mount. Similarly, there is a default set of drop frequencies determining which power-ups will drop during gameplay, but some levels, such as Pandemic, override this, for example to greatly increase the rate of virus power-ups dropping. Information about what power-ups players start with, and which power-ups will be dropping more or less often during gameplay, is shown in the lower right during the few seconds of "warm up" after a new level is chosen before the game begins, as well as in the upper right of the pause menu.

Additionally, when configuring a series of rounds, the room leader can customize power-up options, overriding the per-level settings, specifying the player start with more initial power-ups, or even a smaller initial flame, as well as modifying the drop frequencies so that particular powerups occur more often, less often, or not at all. 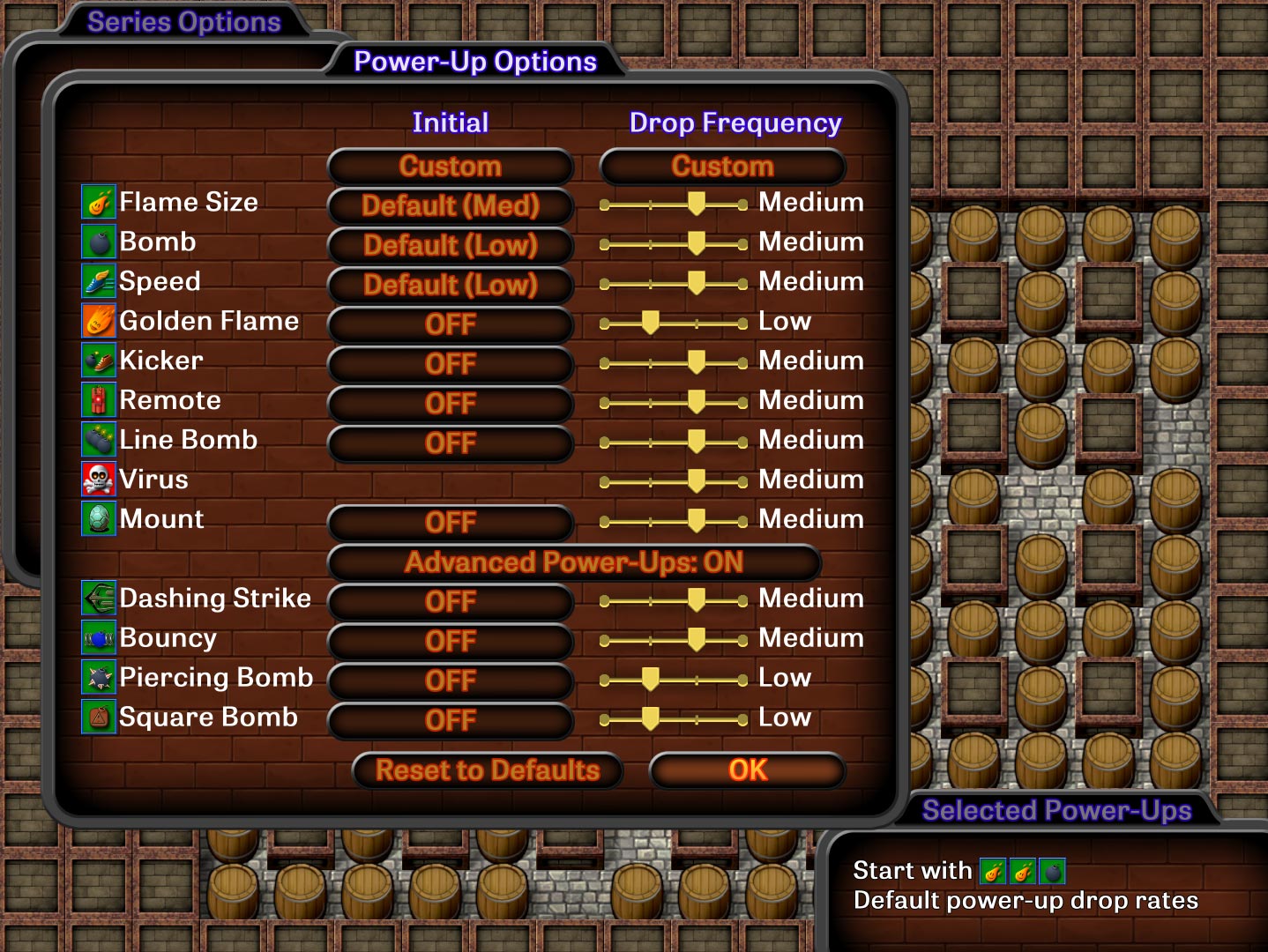 Any number of controllers is supported (up to OS limits - virtually unlimited on Windows, 4 on PS4, plus a keyboard can be used for an additional 2 players). No in-game controller configuration is required, as there are only two main actions ("primary" - drop bomb, and "secondary" for pinging and power-ups) and all face buttons should automatically be assigned alternatingly to those two actions, however buttons can be remapped in controller options for additional customization. Since getting as many people playing Splody at one time, in one location, as easily as possible, is a primary mission of Dashing Strike Games, if you have an odd controller which is not functioning properly in Splody in any way (but is visible/functioning in the Windows "Game Controllers" control panel), please contact us through the Steam forums or email and we will work with you to resolve your issue.

Some Steam options interfere with controllers working in Splody (and other games), especially if you have more than 4 controllers - Steam will disable all but 4 with these options enabled. If you have problems getting controllers to work please check the following:

Xbox 360 controllers are highly recommended, as they are quite common and work trivially with Windows. The wireless receivers are great for ease of use. When setting up large numbers of these we've learned the following things which may be of use:

By default, all controllers have the ability to control game menus, however sometimes young children (or "friends") like disrupting gameplay by pausing, etc, a little too much, so this may be changed under Settings | Controls | Controller Interface Mode to one of the following modes:

Tired of the music tracks in Splody? Use Steam's music player to select your own music!

Most online games played will affect your Rating, and the people with the highest Rating are ranked at the top of the leaderboards, both on the web and inside the game (accessible from the Play Online menu). Where do you stack up to the competition?